The mission of RMCHCS is to serve God by making a profound and lasting difference in the health and quality of life for all people in the community.
Have a fever and cough or shortness of breath? Call the Coronavirus (COVID19) hotline to be evaluated: (505) 236-1074. Drive-up Coronavirus testing is now available in front of the main hospital entrance. Call our hotline first: (505) 236-1074 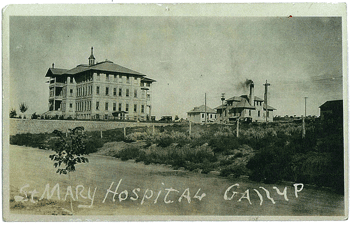 this is a picture of a mother holding her little boy.
Our History


Rehoboth McKinley Christian Health Care Services Services (RMCHCS) was formed by the merger of two hospitals: Rehoboth Christian Hospital and McKinley General Hospital in 1983. However, each institution was started in the early 1900s. Rehoboth Mission Hospital was started in 1910 at the Rehoboth Mission Station, located one mile east of Gallup, by protestant missionaries (Christian Reformed) to serve the healthcare needs of the Native Americans. In 1916 the Poor Sisters of St. Francis took over the running of a small infirmary for railroad workers, which had been operating since 1895 for railroad workers. In 1918 the Sisters moved to the new St. Mary's Hospital in Gallup, and then, in 1969 moved to a newly built McKinley General Hospital. In the late 1950's the U.S. Department of Indian Affairs established a 200-bed hospital for Native Americans, which is known today as Gallup Indian Medical Center.

In the early 1980s, the boards of the two hospitals realized that without combining resources efficiently, neither hospital would survive financially. They decided a merger of the two hospitals would be the best way to maintain their commitment to meeting the healthcare needs of northwestern New Mexico and eastern Arizona. On November 3, 1983, representatives from Rehoboth Christian Hospital and McKinley General Hospital signed an historic agreement to merge the two independent medical facilities in order to create Rehoboth McKinley Christian Hospital, which later became Rehoboth McKinley Christian Health Care Services Services (RMCHCS).

RMCHCS is a 501(c)(3), nonprofit, fully integrated healthcare system that is committed to improving the health and well being of the people of Gallup, McKinley County and surrounding areas. Today it is a 60-bed, acute care hospital , the College of American Pathologists and the American College of Radiologists. RMCHCS also has two outpatient clinics as well as hospice, home health and outpatient behavioral health counseling services.

RMCHCS is the only non-Indian health services medical provider for an approximate 60-mile radius, providing care for patients throughout the region. Except for a 25-bed critical access hospital in Grants, New Mexico, RMCHCS is the only significant civilian hospital for 120 miles.